International Blog Do I have to lay the boundary wire underground?

Do I have to lay the boundary wire underground?

18.04.2021
The boundary wire sends a signal to the robotic lawnmower telling it which areas are to be mowed and which are not. Laying the cable is therefore the most important step before commissioning. For many first-time owners of a robotic lawnmower, this raises the question of whether it is really worth the effort to lay the cable underground - or will the above-ground variant simply suffice.

Laying the perimeter wire is a significant step on the way to having a functioning robotic lawnmower. After all, the wire serves as a signaling mechanism for the device so that it is clear which areas the robot should travel over and which are no-go areas causing more harm than good. However, not all laying is the same - there are two different methods, each with some advantages and disadvantages. This means you don't have to lay the boundary wire underground by any means. Sometimes, however, it is simply a good idea to do so, as the extra effort also comes with some advantages.

The start-up of a robotic mower itself is very easy. You simply place the charging station in a suitable place in the garden, lay the perimeter wire and use the quick installation of your robotic lawnmower. The first exploratory drive can already begin.

When to lay the boundary wire above ground

Laying the perimeter wire above ground is undoubtedly the easier option. You simply lay the wire around the lawn or include beds and other obstacles from the outside by merely fastening the wire at the distance specified by the manufacturer along the lawn edge.

First of all, the clear advantage is that mistakes can swiftly be corrected and you can quickly make changes to the layout, for example, when redesigning the garden.

However, if the boundary wire is laid above ground, it is also permanently exposed to external influences such as rain, ice and snow. The risk of corrosion and weathering is thus notably higher than with underground laying.

At the same time, even a properly taut-laid cable runs the risk of being damaged during gardening work such as thatching or digging up the beds. Other loads, however, such as those caused by the traction wheels of a robotic lawnmower, pose no problem for the perimeter wire.

It is probably undisputable that a wire that is buried underground is less affected by weather conditions. Another advantage is probably that it is invisible- which significantly reduces the risk of damage from the lawn thatcher or other garden equipment.

Of course another advantage is the inconspicuous appearance. The cable is invisible even in paved passages, as you can simply run it under stones. Most cables transmit their signal without problems up to a laying depth of 20 centimeters.

The disadvantages of underground laying are obvious. Once the wire has been laid, it is comparatively complicated to change it, as the cable has to be dug up again each time. In the event of faults, this also makes troubleshooting more difficult if the cable has to be unearthed again.

The laying itself is also more laborious since you will need to make a cut for the wire. This usually works quite well with a lawn edger. If you don't want to go through the trouble yourself and don't want to forego the convenience of laying the cable underground, you can hire a specialist from our company to create the trench for the cable using machines.

It seems tempting to simply lay the wire under the lawn when laying the sod. But this carries a greater risk because you can not test the functionality of the wire until the lawn has been laid. This, in turn, means that troubleshooting can turn out to be costly.

It seems perfectly reasonable to lay the wire above ground first and start the robotic lawnmower. This way, problems can still be detected within the first few days or weeks. After laying the sod, you still have about 3 weeks to push the perimeter wire underneath. Only then is the rooting too strong for it.

However, laying the wire underground also works the same as with any other lawn via digging a small trench into which you simply place the wire - completely independent of when you lay the lawn and purchase a robotic lawnmower. 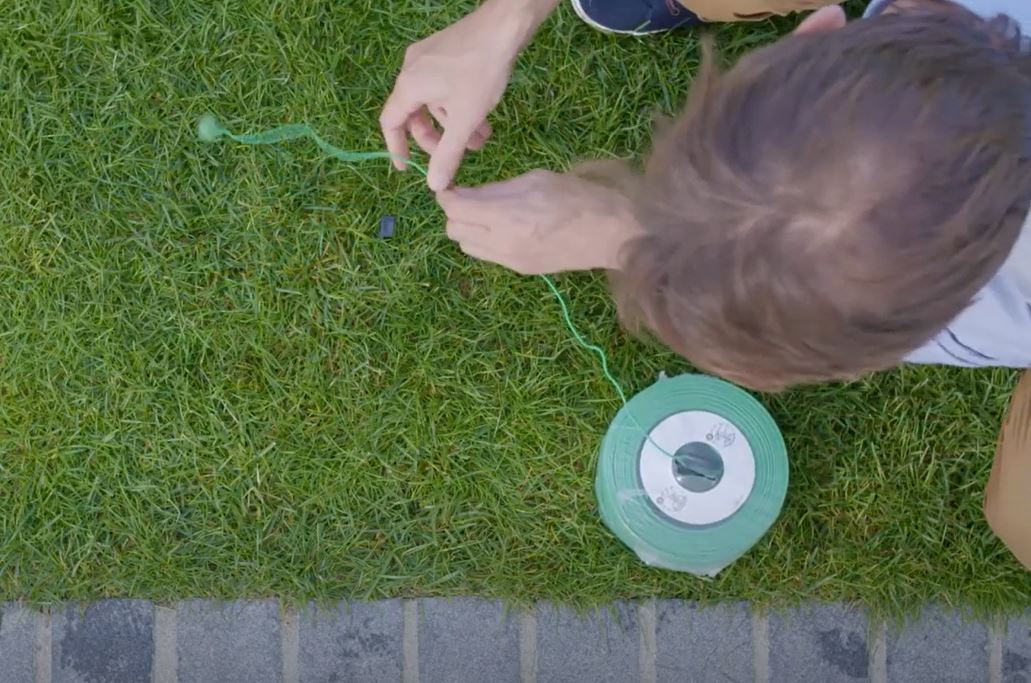 Advantages and disadvantages of the laying methods in comparison

When is it recommended to lay underground?

There is no proper answer to this question posed at the beginning. It is simply not possible to give a general answer as to whether above-ground or underground laying is better.

It is certainly an ideal solution for gardeners who prefer an inconspicuous overall appearance, knowing that the garden design is completed for the coming years. Lawn owners who regularly thatch the greenery also do better with underground installation.

Conversely, above-ground installation is more recommended for people who like to remain flexible.